I built my Big Muff Pi clone following JD Sleep's layout. As you can see by the photo of the circuit (at right), I used perfboard. I haven't etched a PCB yet, but I do follow a PCB layout for my wiring on perfboard. It usually works pretty well.

I put off the Big Muff project for a while, with the thought that it would be redundant when compared to some of my other projects. For instance, Jack Orman's Muffer is based on a section of the Big Muff, so I had a chunk of the sound already. Also, I had tried out a vintage triangle-knob Big Muff and was not impressed by it. But, once I realized I had nearly all the parts to build it, I decided to satisfy my curiosity.

The build went well, though the tone and output section were a little squeezed in. I gained a bit of space by trimming the edge of my transistor sockets (available from Small Bear). Anticipating the swapping of capacitors and diodes, I socketed nearly all of them. I used machined-pin IC sockets (also from Small Bear) trimmed to either rows of three or four. Don't use the IC sockets from Radio Shack, they are wimpy.

For the capacitors, since I wanted to be able to plug in a variety of sizes, I used a four pin IC segment. I connect two of the outer pins with a solder bridge and clip the unused socket tail. I then color the dead pin with a Sharpie so I know which ones to insert the capacitor leads. You can see this best in the photo of the board, to the right of the second transistor.

For the most part, I referred to the mods listed on JD Sleep's Big Muff Pi project page. Here's what I ended up with: 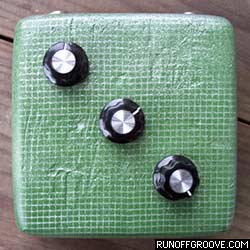 Overall, I like this circuit. It is fun, and since building it I've discovered a few good settings that sound good to me. I am not in love with it, though, so I'm glad that I built one for myself and didn't buy one. The Big Muff Pi is a bit noisy at high Sustain settings, but turning down your guitar volume a tiny bit helps as does turning down the Sustain. The Tone sounds best at around 12:00 to 2:00. With the Tone turned down all the way, it is pretty muffled with no dynamics; turned all the way up there is a real buzzsaw sound.

I put the finished circuit in an electrical junction box covered in Bondo. No switch for this one, it's one of those all or nothing deals. I first painted it with silver, then put a couple strips of drywall webbing on the top. Then I sprayed some green paint to get the grid effect.

Do I recommend others to build it? Sure, it may be the greatest thing ever to your ears, but may be lackluster if you've already built some really great fuzzes. One nice feature is that you can make many well-documented modifications to tailor it to your needs. Visit JD Sleep's site or Tonepad for the project.

I started with the thought of building it stock from the Tonepad project but opted for a few changes as I went. Used 0.1uF electros for input and output and used 0.1uF polys for everything else. The 0.01 was a greenie. The transistors I wanted to use were MPSA18, but went with the 2N5088. This pedal has incredible high gain and it can get noisy, but it was really easy to dial a tone and gain setting that was pleasing to me. I find my clone to be on the creamy side and allows for the leads to be fluid. Love the interaction of harmonics when you do double stop bends or just bend one string and leave the other just ringing. It can become mosquito-buzzy if you are not careful with the settings. Overall I'm really glad I built it.

Sound clips of my clone and A. Colman's are available on the Sounds page.