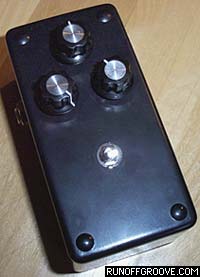 I built my Foxx Tone Machine clone on perfboard, using JD Sleep's layout as a guide. It didn't work when I first fired it up, and I grabbed my trusty Audio Probe (see Aron's Debugging page or R.G. Keen's site for instructions on how to make your own) to pinpoint the problem. It turned out that I had put in an extra resistor from the base of the Q4 to ground. Once I removed the offending part, it worked fine.

However, even though the sound was similar to what I'd heard at Tonefrenzy, there was a lot of background noise. When the guitar volume was on full and the strings muted, the noise was pretty noticeable. As I played, the noise seemed to be absent (or at least masked). A curious element of the noise was the manner with which it "swelled up" after I would stop playing. Basically, while I was playing there was no noticeable noise, but when I muted the strings, there would be a split-second of near silence, then the noise would fade in.

So, I began trying to find the origin of the noise. I hooked up my Audio Probe (go make one!) and began searching. The circuit was quiet until the collector of the third transistor. I measured the voltages of all the transistors (all 2N5088) and compared my findings with JD Sleep's as posted in his build instructions for the Foxx Tone Machine. I was within a reasonable range of all the transistors' pins except the Q3 collector. I measured 6.67 on the collector, while his measured 7.28 volts.

I've noticed that the different gains of various transistors, when placed in the same circuit, can cause the pin voltages to increase or decrease. So, I tried every model of transistor in my stockpile, not only to try to match the voltage, but to help the noise problem. I had no success. 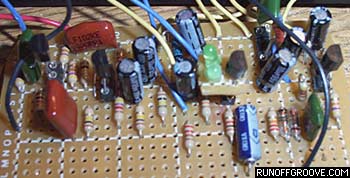 Taking a cue from articles on biasing by GFR and Frank Clarke, I hooked up the socket of Q3 to my breadboard. I then plugged in a 2N5088 with a 1N914 diode from the base to the emitter. No change in voltage. I reversed the orientation of the diode, still no help. But when I placed the diode from collector to base (anode to collector), the noise was greatly decreased. The collector pin voltage plummeted to about 1.2V, and I realized that I had effectively mirrored the set-up of the Bazz Fuss.

In an effort to bring the collector voltage higher, I used a green LED. The collector voltage went up to about 3V, but I wanted to reach 4.5V, since that is optimum number for linear amplifying. When I used two green LEDs in series from collector to base, the collector measured very close to 4.5V. The noise was still pretty much absent, but I noticed a side effect of my rebiasing: slightly less sustain and a small difference in the character of the sound.

I decided to construct a plug-in module for the transistor/LEDs (visible in the above photo). Using a tiny piece of perfboard, I soldered the two LEDs and transistor together so I could easily swap it in or out. That way I can always go back to the stock circuit.

I've recorded two sound clips of the Foxx Tone Machine, one with the bias module installed in the Q3 socket and another with a 2N5088 in place. All settings were the same for both clips to fully illustrate the difference. The non-module clip has a fair amount of noise before I start playing, whereas the module version has no noticeable noise. Also, on the non-module clip, when I mute the strings, you can hear the noise fade in (you may have to turn up the volume to hear it). The clips are available on the Sounds page.

Conclusions: Even though the module lessens the noise, the basic sound is changed too much to justify its use. The sustain of notes is shortened and the Sustain control on the effect needs to be on full to get a close approximation of the non-module sound. I put a 2N5088 in Q3 and decided to overlook the noise.

Update: I replaced the input wire with shielded wire and it seemed to help the noise issue. I decided to try shielded wire after discovering the input wire was quite microphonic. The background noise is greatly reduced when using my humbucker-equipped guitar, but still pretty bad with the single-coil bridge pickup of the other guitar.

Update: Installed the 2N3565 transistors specified by the original schematic. Not too much difference to my ears, but I'm leaving them in for now.

18 April 2003
Update: Scrapped. As it luck would have it, a bit prematurely. Annoyed with the the background noise that I was never able to silence, I dismantled the unit, saving the pots and jacks as I have done too many times before. It is always with much regret that I decide to scrap a pedal. Anyway, I began to think about designing a stripped-down, low-noise version of the Tone Machine. After a couple of dead ends, I began breadboarding the stages of the original circuit.

I followed JD Sleep's layout and schematic (available at GeneralGuitarGadgets.com), so I'll use his parts references when describing the alternate versions. The first modification is to remove the 10uF capacitor (C9). This reduces gain, and consequently, noise. You can also try reducing the size of the cap. This is what I wish I knew before I scrapped the perfboard (photo at top of page). Bummer.

The other option is a bit more involved. I recommend it if you are already planning to breadboard the circuit, since it would require a few jumpers to a finished perfboard or PCB. Omit the 3rd stage (everything between C7 and R22). Move the clipping diodes to the junction of C13 and R25. This mod also reduces gain, along with losing the Tone control, and when the octave is switched on, there is a cool soft attack to notes. The discovery of this almost makes me want to re-build the Tone Machine!