The Harmonic Percolator, produced by the now-defunct Interfax, is one of those legendary and mysterious guitar effect pedals. It is often regarded as a unique entry in the sometimes predictable realm of distortion. A one would expect, its mystery is directly linked to its scarcity. There are two schematics available for the vintage Harmonic Percolator, but the maker of a current-production clone of the unit has said that both have errors.

Enter Tim Escobedo. A designer of simple, great sounding circuits and innovative manipulations of classic effects, Tim developed the Harmonic Jerkulator. The Jerkulator uses the basic architecture of the Percolator, while gracefully side-stepping the disputed parts with generic values in their place or omitting them entirely. The result is a great alternative to the difficult to replicate original.

After breadboarding the circuit a few months ago, I made notes to re-visit the Harmonic Jerkulator, and recently committed it to perfboard. I used sockets for both transistors, the input cap, and the transistors' coupling cap. I haven't boxed it up yet, instead I use my small breadboard for the off-board connections. I've used this technique for the last few projects I've built, and it provides an opportunity to place different tone controls or clipping diodes following the main circuit. I haven't tried the Jerkulator with the Gain control; for now I've been using the guitar volume instead.

Once the perfboard build was completed, I put the stock values in the sockets and plugged in. It sounded good, and could be driven by a wah surprisingly well, unlike some distortions. Increasing the input cap from the stock value of .022uF to .033uF helped the sound of the wah's travel come through with more clarity. Larger values began exhibiting resonance/near oscillation when the wah was in the bass (heel down) postition.

I began trying different transistors and higher gains yielded a less defined distortion. This was most noticeable when both Q1 and Q2 were high gain devices. Changing only one was not as drastic a change, so builders may want to experiment with various types for subtle tonal flavors.

I've liked the sound of a low gain (approximately 100 hFE) metal can 2N2222 for the NPN, and have been using a low-leakage Germanium (120 hFE) from Small Bear Electronics for the PNP. I've really enjoyed the sound of this combination, and have found it perfect for trashy, garage-style sounds.

Gary Burchett has also been experimenting with the Harmonic Jerkulator and adds:
"Try a set of Ge diodes on the end. Stick a 1k resistor in front of the positive diode. You should get this weird compression thing and a really refined grind to the sound."

Listen to the Harmonic Jerkulator with and without diodes!

Below is a table of three different pairs of transistors that I tried along with the pin voltages. 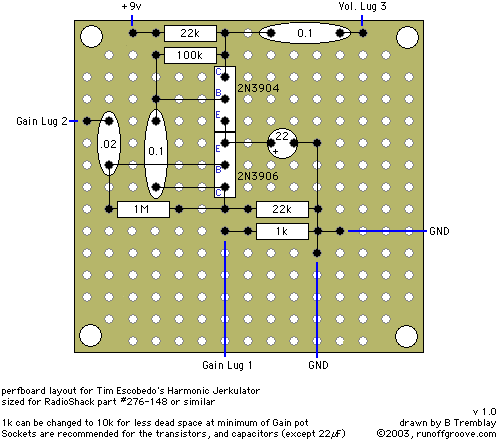