Recently, Tim Escobedo posted an article entitled "The Many Faces of Fuzz." In this article, Tim gave examples of modifications to the classic Arbiter Fuzz Face circuit. The main gist of this article was using BJTs, MOSFets, JFets and combinations thereof in the Q1 and Q2 slots of the Fuzz Face. By doing this, one could experiment with the subtle tone changes of each transistor type.

"The Many Faces of Fuzz" is a brilliant article that until now was wasted on me. I didn't realize the full potential of this circuit until trying to design my own 'mixed transistor' distortion circuits. Now that I've seen the light, I took Tim's idea and ran with it. 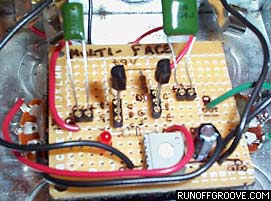 I built Tim's circuit exactly as detailed in his schematic. I used SIP sockets for the transistors. The thought occurred, "why stop there?" I also socketed the input and output capacitors. By doing this, I can get the different transistor sounds, plus have the option of simple in and out EQing. The only things actually on the perfboard (aside from sockets) are the two 100k resistors, the 10k resistor, the 10k trimmer and the 22uF capacitor. You could take this another step by replacing the 100k feedback resistor (between Q1 and Q2) with a 1M linear pot or trimmer as Tim outlined in his article. This would be useful for adapting the circuit to humbucking pickups or single coils. *NOTE: I've added a red LED between the base/gate of Q1 and the emitter of Q1. Place the positive side of the LED toward the emitter. This is for protection of any MOSFet you may use in Q1 position. This is not required, but it will help prevent damage to your transistors and it does not affect the circuits sound.

Please review the photo of my circuit board. Note the sockets' orientation. From top to bottom of each socket it is Collector or Drain, Base or Gate and then Emitter or Source, depending on the transistor plugged into them. Mark this on the board as you see in the photo. This will help you in the future. Also, if you plan on using polarized capacitors, mark the inward facing socket holes with "+" symbols to help you remember. 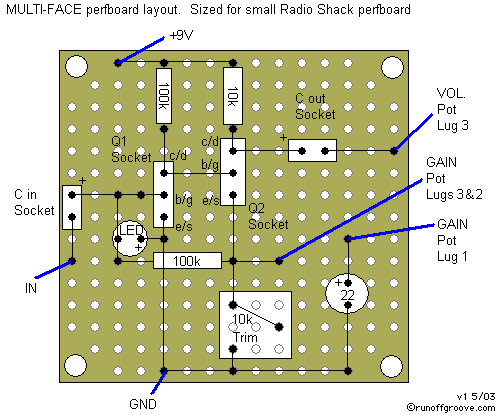 With this setup, you have a sort of "Sansamp" of Fuzz Faces. You will be amazed for hours as you swap transistors and caps until you go completely insane. My advice would be to keep a log of your favorite "settings" as I have done below:

Click the link below for a soundclip of "Settings" 1 through 6 listed above. A first position stacked V "G" chord is played followed by a lick. Note the subtle differences in tones. The clipping is slightly different for each of the six transistor permutations.

Some general findings: "Settings" that used JFets or MOSFets have higher harmonic content than the traditional Fuzz Face. The greatest harmonic content is realized when both transistors are MOSFets. The 10k trimmer will need adjusted when swapping transistors. JFets are very sensitive to adjustment. Just turn the trimmer while playing to get the sound you want. You can get some sick sputtering sounds by intentionally mis-biasing. I found Jimi's Monterey "Wild Thing" sound by tweaking the trimmer.

If you are a Fuzz Face fan or if you would like to see how a simple circuit like this can cover OD, Distortion and Fuzz flavors, I encourage you to build one today. After reading this, why would you build another Fuzz Face?