Rob Strand traced a schematic from the below photo and others. Wow!

My Ross Phaser is the second of five known versions.
Rob Strand wrote a guide to the chronology, along with some more schematics and photos.

My Ross Phaser, in its stock form, had a bit of a volume boost when engaged. Also, the effected signal had a slightly excessive amount of treble. Mark Hammer (hammer.ampage.org) suggested the following modifications (refer to the above schematic and parts overlay links for the components):

R32 doesn't seem to have any sort of necessary function from what I can see. If it were me, what I'd do is this: Replace R31 with a 100k fixed resistor and a 50k trimpot. Tie the input of the trimpot to C14, the other outside lug to the 100k resistor, and take your output from the wiper. The intent of this is to simply pad down the output signal by a modest amount. So, tinker with the trimmer until you get no discernible volume difference between effect and bypass.

I also added a socket between the output and ground for a treble-bleed capacitor. I built the below circuit on a small piece of perfboard and wired it to the stock PCB after removing R31 and R32. I now have the volume set as close to unity as possible with my hearing and it is a great improvement. I'm very happy I took the plunge - I'd rather have it modded to be useful than an original-stock collector's item. 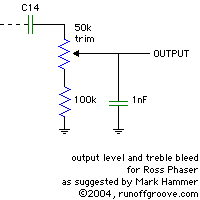 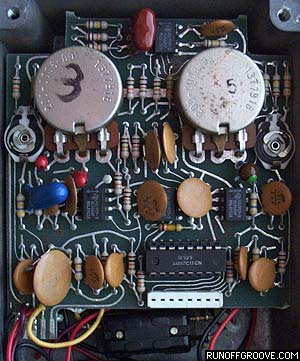 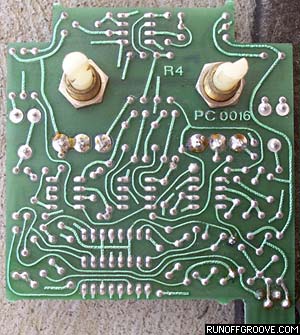 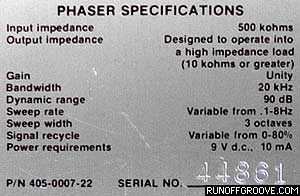 How to easily remove the knobs of Ross effect pedals