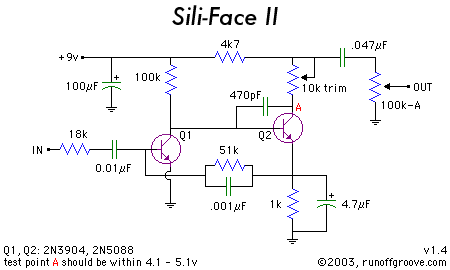 The original Sili-Face was developed to overcome the pitfalls of the Fuzz Face. The Sili-Face II has been tweaked to behave nicely in a band setting, with the popular rolled-off guitar volume sound at its core. Added features are series resistance on the input, decreased negative feedback, a mellowing cap on the second transistor, and carefully chosen values for the input and output caps, and the bypass caps on the second transistor's emitter and in parallel with the feedback resistor. No need to time-travel for that elusive Germanium part: common silicon 2N3904 transistors are used. The result, a pleasing narrower sound that will sit nicely in a mix, and will give you more of the "guitar volume knob" goodies you may crave. Care must be taken to tune the collector resistor on Q2 to give you about half the supply voltage.

Interestingly, the sound is somewhat similar to a good MXR Distortion +, but cleans up much better. Also, there is less hiss than the IC powered design. The added resistance to the input helps tone things down a little. It also seems to produce more shades of grit between wide open and off. The small cap from Q2's collector to base gets rid of the fizzies that can make your ears hurt after standing in front of your amp at rehearsal. The essence of the sound is not unlike the Tonebender MkII Pro, but without the outrageous gain.

You will notice a cool effect on the decay of notes and chords. Hit an open A chord, for example, and let it ring out. You'll hear the grit, then magically it rings out clean as it decays. This makes for a really cool, expressive effect I've not heard much. Sustain and harmonics are good. The clean decay sustains quite well, too. Almost as if there is a bit of light compression effect.

The usual jangly clean sound of a Fuzz Face is still present. Working the guitar's volume, there is an increased range of sounds from full on grind, to heavy and light overdrive, down to a nice chimey clean sound. This circuit works very well with a neck single coil for a great texas blues sound. Humbuckers in a Les Paul setup work equally well. Early ZZ Top-like sounds can be easily made. Train-track a quarter and you can pinch ol' Pearly to the dulcet tones of '70s 'Top. Also note the rock and roll-approved single control knob. I suggest labeling it "More" and work the sound from your guitar. The stock Fuzz Face "Fuzz" control never worked well for me.

Nice, tight blues tones and classic '70s rock sounds are easily attainable, even feeding a small transistor amp set clean. There is minimal noise, no oscillations and a very simple build. Small Bear stocks all the parts you need for building this effect. If you have an old Fuzz Face sitting around, try reviving it with this set of mods for a bit more OD/Distortion and less Fuzz. 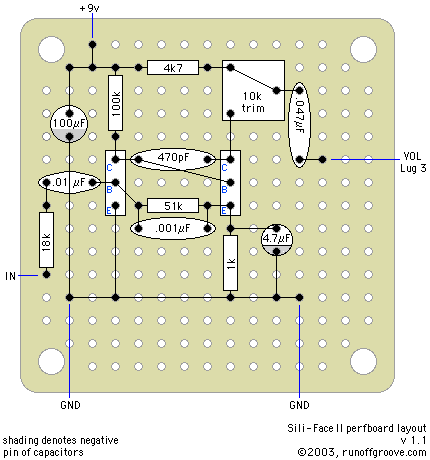