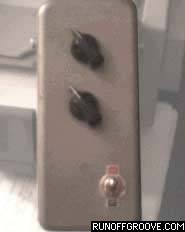 My early experiences with the Colorsound Tonebender Professional Mark II were a long and confusing ordeal, with no real answers to show for it. I first built the circuit, using Steve Daniels' schematic, in May 2001. It was my fifth or six fuzz, following two Fuzz Faces. The Tonebender design is basically a Fuzz Face with an extra gain stage. The schematic and layout can be found at Small Bear, as I mentioned above, and a schematic/layout can be found at the Green Fuz site as well.

The original circuit uses germanium transistors and they are most likely an integral part of the Tonebender's legendary sound. I had originally intended to make a silicon transistor-based Tonebender, after making a silicon Fuzz Face, but after salvaging some germaniums out of a thrift store radio, I decided to stay true to the original design.

I liked the fuzz from the circuit, but wasn't sure if I had really achieved the "Tonebender MkII sound." I did deviate from the schematic, but it was only in the way of a trimpot replacing the fixed resistor on Q3's collector. After reading volumes of internet lore regarding the proper biasing of Fuzz Faces, it seemed like a smart move.

However, there is not any information pertaining specifically to the Tonebender MkII, so I stuck with the GEOfex Fuzz Face guidelines, biasing the Q3 collector voltage to around -4.5v. Since then, I've been endlessly searching for a really great sound by trying different biasing and swapping transistors. With all germanium transistors, the sound seemed a bit woolly to me so I tried to correct that with biasing. I didn't have much luck (at least in terms of long-term success- the Tonebender has been very much a love/hate relationship for me), so I started swapping around the transistors. The Joe Gagan EasyFace uses a silicon transistor (usually a 2N3906) for Q1 (Q2 in TBMK2), so I decided to try that in my Tonebender. The sound gained some definition and gain, but still seemed a bit ragged.

I tried an all-silicon version, but there was no sound. It turned out that the Tonebender needs a germanium transistor for Q1. My understanding is that the silicon transistor doesn't handle the saturation well, and therefore doesn't amplify. When I recently began another session of tests with the Tonebender, I measured the voltages of Q1, which gave me direct evidence of the saturation.

Taking a cue from Frank Clarke's Mutant Tonebender circuit, I saw that I could add in two resistors (at Q1 base and emitter) and the first stage would be essentially a Rangemaster. I measured the voltages of my Rangemaster clone, and when I added in those resistors using a silicon transistor in Q1, the circuit worked! I then moved from the breadboard to a tiny plug-in module that contained the transistor and the two resistors. By making the module (see schematic at right) rather than soldering in those new components, I could switch from stock to compensated very easily.

Below are tables of my various experiments with transistors. I've included data from my Fuzz Faces and Rangemaster, which helped me understand what exactly was happening with the Tonebender's transistors. At the bottom of the page are the results of the matched set from Small Bear.