After purchasing and installing the Small Bear matched set, I began pondering mods to the circuit. I developed the following schematic based on message board posts and schematics by Jack Orman, Joe Gagan, Aron Nelson, and R.G. Keen (to name only a few!). 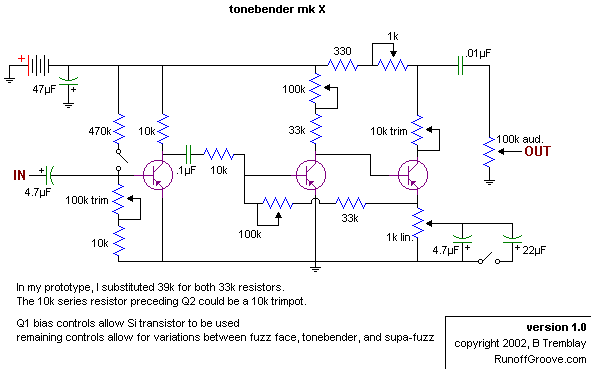 Upon finishing the construction, I set the controls to approximate the Mk II values, and tuned the voltages of Q2 and Q3 to the matched set readings. There is a lot of oscillation available, and some differences in sound texture. I plan to post a revised schematic after getting to know it a bit more.

For the most part, my controls had pretty underwhelming effect on the sound. The 1k pot (preceeding the Q3 trimpot) is, in my opinion, the only good addition to the circuit, and it functions as a output booster. The Q2 collector pot and feedback pot may have some use, but don't need to be panel pots, trimpots would be fine. The Q1 bias controls are necessary if you want to use a silicon transistor in the first stage, but aren't with a germanium. I've drawn a new schematic to reflect my "mods to the mods." 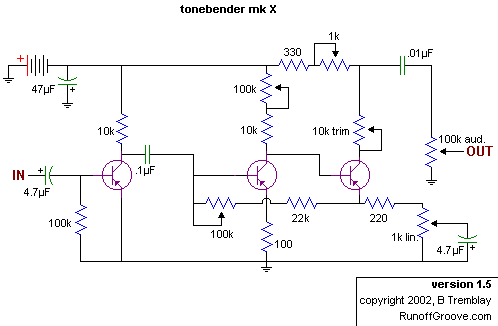 As seen above, I have incorporated an element of Jack Orman's YAFF, series resistance at the emitters of Q2 and Q3. This eliminated the oscillation that occured when the Fuzz pot was at full. As I mentioned above, there should be only (3) panel pots: the 1k near the output, the fuzz pot, and the volume.