Stuart Castledine's Guitars, Amps, and Effects site is, in my opinion, the definitive source for mods to the Vox V847 wah-wah. This page is intended as a companion to his detailed instructions and explanations. Please note that mods to a wah can be very subjective; this page is merely documentation of my preferred component values. These modifications were tested with my so-called pretty guitar, so the values that you like best may not correspond with mine. That's fine, this is just a starting point.

I don't consider the Fulltone replacement pot (available from Small Bear Electronics) as part of my wah mods since it was just a replacement for the stock pot, which had become scratchy. I didn't audition different manufacturers' pots, I just chose the Fulltone since it was about the same price as the OEM replacement.

Also, the positioning of the rack and pinion assembly is difficult to quantify. You'll need to find the best position by trial and error. 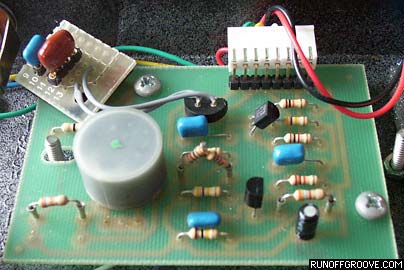 Single in-line pin sockets (also available from Small Bear) were used in place of the stock components, which allow inserting fixed resistors or leads of a pot wired as a variable resistor. They can be tricky to solder, but a bit of electrical tape keeps them in place. Be careful when using the soldering iron on the PCB traces, they can peel off if abused. The sweep cap socket is a partial TO-5 transistor socket. I decided to make a daughter board to accomodate parallel caps for non-standard values.

A common complaint is the poor interaction of a wah-wah driving a Fuzz Face. The below buffer/impedance matcher stage (very similar to the gain stage of the modified EA Tremolo, also designed by Gez Paton), can be added to your wah to solve this well-documented problem. 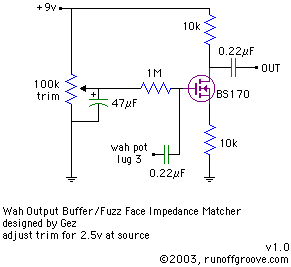 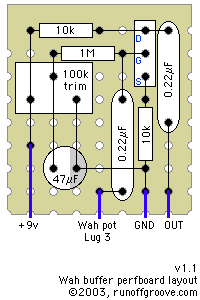