This project began as an investigation into the legendary and mysterious Fuzz Face as possibly the answer to my overall quest for the coolest, most majestic guitar tone in the galaxy. I was skeptical that a 40 year old fuzz device offered much potential. After reading the various articles about it I was intrigued by the inherent asymmetrical and symmetrical distortion of the circuit and everyone seemed to enjoy tweaking it, so I decided to give it a twirl.

I began with Aron Nelson's Hornet, which seemed like a good way to tweak myself into oblivion because of the 3 trim pots and transistor sockets. A goal I of mine while studying distortion devices has been to combine the 3 basic types of transistors in hopes of creating some sonic alchemy. By using a jfet, mosfet and Germanium/Silicon together I was hoping to approach Tone Utopia.

In the midst of the quest, Tim Escobedo posted the Many Faces of Fuzz and Brian put up his Tonebender MK X. Later Gary Burchett's Multi-Face article was posted. This project turned out to be a fusion of the 3, with the addition of some discoveries of my own. I'm glad they covered the technical parts, since I don't know them.

Trying different Fuzz Face versions with different transistors, and not adjusting the bias, is just finding the one that biases correctly with that version. One may sound good with X trans and not with Y because of the bias and not the transistor. You can hear the different overtones being reinforced or canceled as the bias pot is turned. That is why I use the term "voicing" to describe the process, in addition to the input and output caps. This way you can get the ultimate sound for you and your setup. You can also use a DPDT switch, as Oskar Bruil suggests, to change transistors at all 3 spots.

I found within the Fuzz Face an attack and decay which I had been hunting for 30 years. It is the sound of Leslie West (Mountain) with his Les Paul Jr. running through a raging Marshall stack which was then compressed, processed, and recorded through whatever technology was being used in 1969. I've not seen any reference to him using one, but I'm wondering at this point. To me a distortion box is like plugging your guitar into a synth. It goes off into oblivion and then gradually returns to being a guitar as it decays.

I have found this adventure both joyous and frustrating, while in the process becoming a better guitarist and writing some killer riffs inspired by the tones that have been achieved. My research facility is the laundry closet in my apartment, which also serves as my recording studio/haven. My input of choice is a 1960s Melody Maker with a Seymour Duncan Full Shred humbucker. It has great clarity even through lots of distortion and sounds better than any other pick-up I've found. It is probably medium/high in output and fairly bright, yet chunky. The Pearly Gates is also very nice, for more of a vintage vibe.

There are a mind numbing number of combinations of transistor and input and output caps with the basic Fuzz Face. Add in a 3rd transistor and obsession followed by catatonic overload set in, The Surrender Bender. As many have said, it's all subjective and I find myself to be quite subject to change. I have gone to bed thinking I had found the ultimate combo, only to awaken the next day to decide it sucks. There is not an "ultimate" and I arrived at this design of cool combinations intellectually rather than sonically. However, it allows for many variations, as pointed out by others.

Lacking Jimi Hendrix' raging Marshall stacks, women, psychodelia, arena, swagger, imagination, skill, etc., I determined that an extra gain stage was needed to get the Fuzz Face closer to where I wanted to go. Thus the FF morphed into the Bender, "That's what I'm talking about," Jimi Hendrix. This really got the laundry closet rocking.

The original PNP version was changed to NPN, to allow for mad scientist experimentation. In the process, I did come up with a nice PNP version with Germaniums at Q1 and Q3 (the Easy Bender ala Joe Gagan) and a Silicon2N2907/2N3906/2N5087 for Q2.

I started into building boxes because I wanted to vary the actual harmonic content over time, rather than just the EQ. This leads us to biasing. First, I don't like boxes that turn my bridge pick-up (which is usually fairly bright) into a neck sounding pickup as it decays. This may be due to asymmetrical distortion, I'm not sure. I also find that the G on the 3rd string at the 12th fret to be bad about doing the "Woman Tone" thing. This became my test note for biasing purposes. I found with the FF I could get very close to the standard -4.5v by adjusting the bias for max neck pick-up sound, while using my bridge pick-up. Consequently, I prefer bias voltages above or below that value, same with silicon, mosfets, and jfets. As many have said, adjust it by ear. The tone for each note on each string can be varied via bias, so pick a sweet spot for your guitar, pick-up(s), amp, etc. I don't think I will build another distortion without external biasing/trim pots.

A breakthough occurred when (after several shots of vodka) I tried a J201 jfet in the Q1 spot rather than the Germanium a friend had sent me. As Brian indicated Q1 works with a Germanium trans, but a Silicon requires 2 additional resistors in order to function. I think this is due to the leakage of the Germ trans. If you reduce the emitter resistor to 150ohms (Brian used 2.7K in his bias module) it becomes the first stage of a Big Muff Pi, which is what Jack Orman did with the AMZ Overdrive Pro. I refer to this as the Pie Face. Another thing I just tried, was to use the Bazz Fuss circuit for Q1 and the FF for Q2 and Q3. Then you can try all the Multi-Face mods in addition to the various Bazz Fuss mods.

The J201 was cleaner (not necessarily good) brighter, (definite plus) and louder (another plus) than the 75 Hfe Germ 2N388, also, much cheaper and easier find. The J201 required no mods to work, but I suspect more gain could be had with that 100k resistor to ground at input raised to 1 meg. Since I wanted something novel, the J201 is at Q1. This left the Germ for Q2 or Q3 and Mosfet BS170 (seems a little brighter and more musical, maybe due to less gain) or 2N7000 (seems to have more gain, highs and lows, Mung the Destroyer sound). The J201 does not work well at Q2 but is fine elsewhere. The Germ works in all 3 spots and the Mosfets like Q2 and Q3. Si's also sound good in Q2 and Q3 but require mod's to work at Q1. After many hours of experimentation, I ended up with the J201 at Q1, the 2N7000 at Q2 (it really gets with the program and I love the racy part #) tempered by the Germ at Q3 to get the best of the old and the new. All combo's sound good, just different. I have found the Radio Shack silicon 2N3053 metal can (seemed to reduce squealing problems) and MPSA05 to work well, both crunching up better than a 2N3904. I like the RS 2N3904 types - MPSA05 - in Q2 and Q3 for maximum feedback and distortion, seemingly more than high gain types, 5088, 5089, MPSA18, MPSA13, etc. The Jfet 201 works nicely in Q3 with a Mosfet or Si in Q2. It seems to have a little more midrange with slightly less gain. If you want to stick with the newer stuff a 2N7000 at Q2 and BS170 at Q3 sounds cool or Mosfet at Q2 and SI at Q3. If you can't find an NPN Germ a BS170 in Q2 and J201 in Q3 also sounds delightful. I can't decide which I like most.

My gain test involves plugging the thing in, flipping on my amp, and seeing how long and if the guitar leaning against the wall starts to feedback. This is at very low levels, and the winners are the 2 Si's.

For Q1, I recommend a 25K trim pot, Q2 a 100K trim pot and Q3 an externally mounted 50K pot. Using a 5K Fuzz pot pushed my bias voltages up, but those values should work with a 1K or 2K pot as well. Q1 will be around 12K. Q2 varies depending on the trans used from 22K to 100K. You can use a 100K resistor for most trans, but the GE likes 33K. Q3 seems to come in around anywhere from 5K to 50K depending again on the trans and size of Fuzz pot used.

Once I got the Benders really cooking I found I still wanted to get more emphasis on the plain strings and high notes. This is sort of an issue with me since I've played through dark solid state amps for too many years. I wanted the highs to sing and sustain as well as the nasty bottom end I had achieved. The Sweet 16 I built (and highly recommend if you like scooped mids) has a voicing circuit which consists of a 470pf cap and 470K resistor in parallel. I speculate this provides a rising frequency response in between the 6db/oct. of a cap and 0db/oct. of a resistor. I thought that by using a pot for the resistance I would get either the entire signal bypassing the cap at minimum and the entire signal going through the cap with the pot at maximum, giving maybe a 3db/oct. rising response in-between. It turns out that a .001uf cap and 100K pot work well and achieve most of the effect. The 470pf/470K pot achieves maximum effect. It goes from a brighter cleaner sound at minimum, nice, to thick heavy fuzz at max, nasty. Thus I called it the Nasty Nob. It's still hot and bothered either way and helps you compensate for single coil/humbucking pups and old/new strings, plus reverses the aging process of the user. I put it between the first stage and the FF section. Needless to say, I will have a Nasty Nob and Bias for Q3 externally mounted at the expense of a Fuzz knob, which would be maxed anyway. I think a different box for each guitar is not unreasonable.

Originally lacking sockets, I used a 20 pin IC socket which all caps except the 10uf electro was mounted. I had anticipated that I would either place 2 FF in series or add a BMP stage in front of the FF. This arrangement also allowed me to experiment with the first stage placed after the FF section, similar to some of the fuzzes at Fuzz Central. I found that arrangement sounded good, but lacked the "Hammer of the Gods." Also, I built the Bazz Fuss on with this arrangement.

Hope you enjoy it as much as I have. I look forward to some feedback (ha ha). 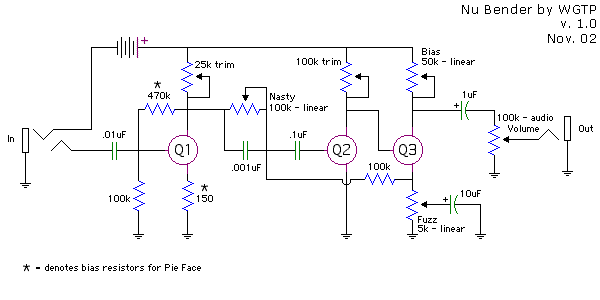